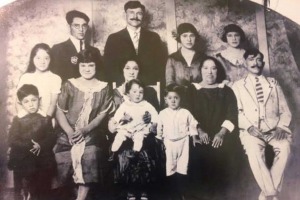 Family Guel photo from 100 years ago

As the Guel family continues to grow, migrate, and reconnect online, we are reminded of just how powerful the internet can be as a tool to bring us together over and over again, generation after generation.  This website was initially developed to keep the descendants of Pablo & Carmen Guel in touch with each other (featured here in the glasses and in front of him with the ruffled dress and flower in her hair), but over time, it has helped us reconnect with family from all over.  This photo in particular is posted on the scrolling feed to our website because it sentimentally captures our heritage, the first to migrate to the United States. 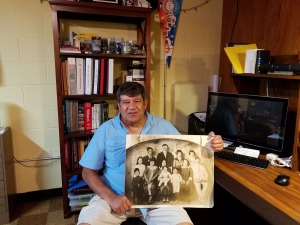 Because of this picture, we were contacted this week via Facebook by a long lost cousin, David Salazar, who lives in Hammond, Indiana. He wrote to us to say:  “My name is David Salazar with a photo of my Grandmother Candelaria and my father Isidoro Guel Salazar as a 2 year old seated on her lap.”   What a beautiful opportunity to reconnect!

As for the history of the original picture that brings us full circle? By swapping stories and comparing notes, we’ve confirmed the following:

La Familia Guel migrated to the United States over 100 years ago.

During the Mexican Revolution of 1910, La Familia Guel lived in the city of San Luis Potosi, Mexico. The head of the family, Juan Guel, was drafted by the Federales, while his oldest son, Marciano Guel, was drafted by The Revolutionary Army. His wife Simona, his three daughters (Candelaria, Ignacia, and Maria), and his youngest son Pablo were left to fend for themselves. Pablo was about 8 to 10 years old at the time.

On the eve of an attack on the city of San Luis Potosi by the Revolutionary Army, Marciano deserted in order to save his family from the expected atrocities. Marciano fled with his family to the United States. The family settled temporarily at the Texas border so that they could continue their search for Juan Guel. Unable to find Juan Guel, the family migrated to Bauer, Nebraska.

This photo was taken in Bauer, Nebraska around 1926. Simona Cisneros Guel is seated in the front row, second from the right. Her oldest son, Marciano Guel, is seated next to her. Simona’s oldest daughter, Candelaria, is seated next to her. Candelaria’s husband, Tranquilino Salazar, is standing directly behind her. The four children belong to Cancelaria and Tranquilino (Far left is Trinidad and David, the baby is Isidoro, and Elpidio is standing next to Simona). Standing next to Tranquilino is Ignacia Guel and Maria Guel. Pablo Guel is standing in the back row, far left. Pablo’s young wife, Carmen Corrales de Guel, is seated directly in front of him. Carmen is expecting her first child, Ana.

We are proud that the internet brings with it an opportunity for new generations to meet again online.

For those near and far, we remind you that the Guel family Facebook Page is a place for descendants of all those in this picture and beyond to reconnect.  Reach out!  Share your photos; connect with your familia; stay in touch!

The Guel-Vinaja Family Facebook Group is also a place where direct descendants specifically of Pablo & Carmen Guel can reconnect as well.

If you have stories to share about our history, heritage, traditions, and memories and you would like them posted to the Guel Family website, please email us here with your story and attach a JPG picture or video.