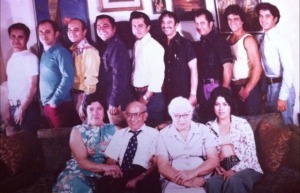 Grandma Carmen’s parents, Rosendo Corrales and Teresa Otero were very much in love, so much so that they married against their parents’ wishes. From this great love, our grandmother, Carmen Corrales was born on June 19, 1910 in the town of Cosala , Sinaloa , Mexico . Cosala is just north of Mazatlan .

Grandma Carmen was 4 1/2 years old when both of her parents died. The story goes that Carmen’s father, Rosendo, had made her mother, Teresa, a beautiful hair comb out of bone. This comb became a tresure with sentimental value. One day while she drew water from a well, the comb fell in the well. Rosendo drowned trying to recover the comb. Teresa jumped in after him and although she was able to escape from the well, she caught pneumonia and eventually died.
Grandma Carmen was one of four children who were left as orphans. The oldest brother, Daniel, was 10 ½ years old at the time. He did not want to go to the orphanage, so he ran away. Daniel did what he could to live, selling knick knacks in the streets, but never forgot his sisters and would sneak around to see them and give them candies. The youngest brother, Rosendo, was 1 ½ years old at the time and was taken in by his godparents. Grandma Carmen remained in the orphanage until she was 12 years old, along with her oldest sister, Jesusita (Tia Chuy).

When Grandma Carmen was 12, Aunt Cuca, who lived in the United States , adopted the two sisters. She brought them to Bayar , Nebraska to work in a boarding house for farm workers.

When Grandma’s sister, my Aunty Chuy, became 15 years of age, her marriage was arranged to an older man, Charlie White.

As Grandma Carmen approached her 15th birthday, plans were started to arrange her marriage. But, along comes Pablo Guel to sweep her off her feet. Pablo lived in the neighborhood and met Carmen while he was playing baseball. She drew water from a water pump for him, an thereafter fell in love and got married.

From 1925 to 1935, Pablo and Carmen lived in Nebraska and Wyoming . Carmen gave birth to 6 children during this time: Ana, Juan, Rita (who passed away at the age of 10 months), Luis, Leonardo and Juanita.

In1935, Pablo, Carmen and their 6 children moved to San Luis Potosi , Mexico . Juanita died in Mexico at the age of 7. However, Carmen gave birth to 7 more children: Lalo, Feliz, Pablo, Elvia, Alejo, Marcelino and Vicente.

Carmen’s son Luis was the first to settle in the Bay Area with the help of his Uncle Rosendo Corrales. (That’s right, Grandma’s younger brother who was 1 ½ when their parents died) Luis then helped Ana and her family settle in the Bay Area. They all then helped bring the rest of the family over. Pablo and Carmen moved into their house at 2107 Monroe Street in Santa Clara , California in November 1957.

In asking several of her children of what they remember about Grandma Carmen, these were a few of the responses:

“I remember my mother in Mexico on her knees grinding corn for tortillas because there was no money. She sacrificed so much for her children, she would not eat so that her children could eat.”

“It hurt her to see her children in poverty. She provided the best she could. She was strong and loved everyone so much.”

“We had no stove and no water until nightfall because the water pressure would not get up the hill to us until the town below stopped using the water. We had no electricity, but we always had a hot meal of tortillas and beans before she sent us to school.”

“She was an orphan until she was 12 but was treated like a daughter by her mother-in-law. She in turn treated her daughter in-laws like daughters. They call her their second mom.”

“My mom’s stubborn temper was kind of funny sometimes. One Christmas we did not have a Christmas tree and my nephew and I went out to cut some lawns and bought a tree. She was mad because she said the tree had made a mess, but soon she warmed-up to the spirit.”

“My mother was the link that kept us together. She would want us to stay together as a family and not float apart. Somehow we need to do this for her.”

So what can we lean from my grandmother’s story? She was born of the great love her parents had for each other. As orphans, her brothers and sister overcame the odds and stayed in touch to support each other. She taught her children to love, respect, support and help each other. Through very difficult times, she kept her family together.

Family was her whole life. She never wanted anything for herself.

I think she would want our family to stay together, and for our love for one another to grow stronger. I think we owe her this much.